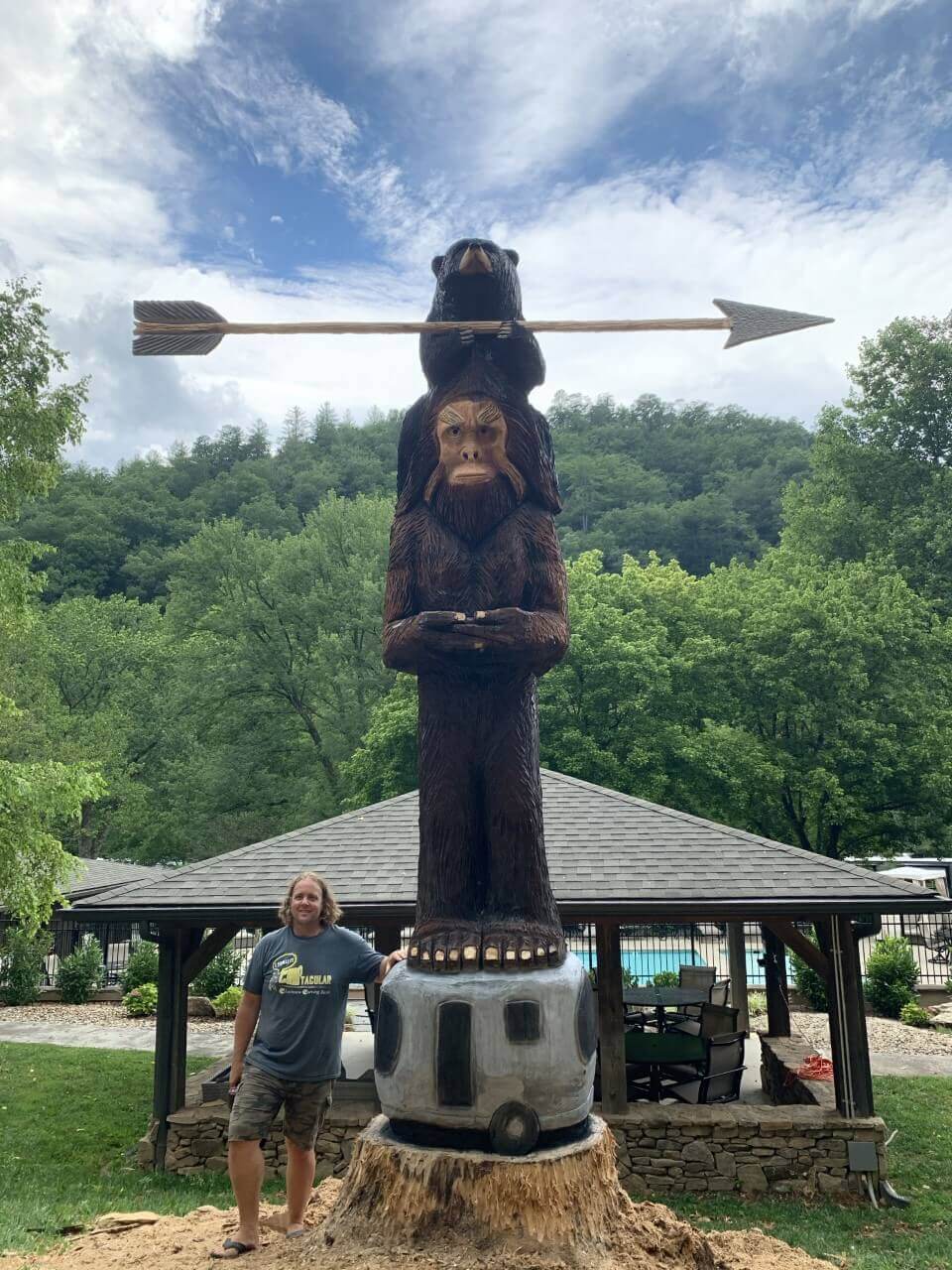 The next time you climb our Mountain or Nature Hiking Trails at Little Arrow Outdoor Resort in Townsend, Tennessee, don’t be startled when you encounter a massive fellow lounging at the top. 40 feet long and 15 feet high, “Bigfoot Burt” loves to take in the view of our Great Smoky Mountains National Park. This all-American Yeti arrived at the resort courtesy of Bubba Daniel, who specializes in one-of-a-kind chainsaw sculptures. We caught up with Bubba between projects to learn more about his background, and special form of art.

With five carvings on the property (and counting) Brian “Bubba” Daniel repurposes our cherished trees that have reached the end of their lives. From the first piece he created for Little Arrow–a table and chair from the stump of a poplar tree–we knew this was the start of a good thing. Since then we’ve adopted him as a member of the Little Arrow tribe, and we’re happy the feeling is mutual. “The Little Arrow staff is my number one favorite thing about the resort,” said Bubba. “Their attention to detail and care for the environment around them stands out.”

Bubba has a background as unique as his art pieces. Born in scenic Cleveland, Tennessee, his life has flowed from Honky Tonk music (as a roadie in Texas for actor/musician Ryan Bingham), to surfing in Panema (which he picked up from famed songwriter Clay Baker), and chainsaw carving (learned from West Texas fiddle player Doug Moreland, for whom Bubba also worked as a roadie). After moving back to East Tennessee, Bubba narrowed his focus to chainsaw carving. “I began pursuing it with tenacity,” he said. “Like they say, the more you feed your fire, the harder you burn.” His love of surfing still smolders, however; Bubba hides a wave somewhere within each of his works of art.

The idea for Bigfoot Burt at Little Arrow came from none other than the resort’s CEO, Carmen Simpher. “She said, ‘Have you ever seen those giants? We want one for the top of the mountain.’”, Bubba explained. “We talked about what would fit there, because we didn’t want to block the view. I had the idea for one lying down, inspired by Burt Reynolds’ famous photo spread.” Enlisting a trusted fellow chainsaw artist to help on the project, the two worked on the cedar sculpture from the fall of 2021 to the following spring. “It took over 20 truckloads carted up the mountain,” said Bubba of the massive project. “The head alone weighed 600 lbs.”

The Tennessee native’s work is far from finished at Little Arrow. In fact, his next project is an eagle carved from an aged poplar. “Our guests love it when Bubba comes,” said Cassie Simpher, Director of Marketing and Operations for the resort. “They gather around to watch him carve, and he talks to them as he works. We’ve even created t-shirts for our Camp Store featuring Bigfoot Burt!”

Bubba enjoys the interactions with the guests because he knows they are in a happy place. “The campers should know that they have chosen the best spot for their Smoky Mountain experience,” he said.

For an unforgettable Townsend, Tennessee camping, glamping, or RVing vacation backed by the breathtaking beauty of the Great Smoky Mountains National Park, come visit us at Little Arrow. Don’t forget to make the trek to visit Bigfoot Burt–the patriotic Sasquatch will be waiting on you with an American flag just in time for July 4th.

And if you hear the buzz of a chainsaw, just holler, “Hey, Bubba!”

It's giving 🍃 fall vibes 🍂 Do you decor for